The Hunger Games VS The Cabin in the Woods Part 1

It’s funny then that in the space of 24 hours, I watched two films at the cinema that both deal with the theme of sacrifice: ‘The Cabin in the Woods’ and ‘The Hunger Games‘.

I have already written a post detailing my initial thoughts of “cabin’ here but Ill summarise the plot here: (spoilers) 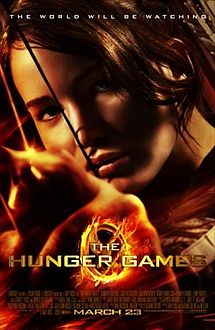 The film follows five college students who spend the weekend at a cabin and are killed off one by one. What soon becomes clear to the survivors is that they are part of a worldwide sacrificial system to appease the Gods who live underneath the ground.

For many the story of ‘Hunger Games’ is more familiar but here is a quick summary courtesy of IMDB:

Set in a future where the Capitol selects a boy and girl from the twelve districts to fight to the death on live television, Katniss Everdeen volunteers to take her younger sister’s place for the latest match.

The Hunger Games, the annual event where the young people kill each other, was established after some of the inhabitants staged an uprising. The Games are a reminder of what the people did and why they should never try it again. In some way the fighters are living sacrifices, killed to appease the President.

Both films deal with a worldwide sacrificial system, involving young people, that is set up to appease and entertain. In 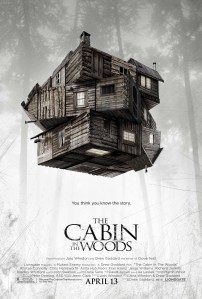 “cabin’ the young people do not know that they are part of it, whereas in ‘Games’ they do. Both films also end with the survivors choosing to turn against the system.

But there are key differences that mark out the films.

In ‘Cabin’ the Gods are angry. They want death and destruction and so the sacrificial system is set up to entertain them and take their minds off of killing everyone. It is a barter system. If they do not get their sacrifices, their will be bloodshed on a colossal level. Millions will die. What the film seems to suggest is that this is a continuation of the sacrificial system that has taken place since before the Old Testament was written and their are glimpses of Old Testament scenes in the opening credits. To sum it up, this systems primary function is to appease the God’s wrath.

In ‘Games’ the primary function of the sacrificial system is to remind the people of their guilt and through that, subdue them. It is not about appeasing a God or Gods but instead, it is a symbol of oppressive power and authority.

As I reflect on these movies and there sacrificial structures I see some similarities between them and the atonement (the crucifixion of Jesus) as well as some key differences.

In the next post I’ll explore this a little further.